The Gift of Blood for Peace

Welcome to this time of prayer promoted as a time of powerful communion within the Congregation to invoke peace and pray for this torn and divided world of ours.
Immediately I want to thank the Sisters of CIS (Patrizia, Rani and Elisabeth), the availability of interpreters and especially each of you for having chosen to be here, to intercede and invoke the power of the Blood of Christ, blood shed in the victims of war and every kind of violence.
The war in Ukraine is inevitably affecting all of us.  It is a bloody conflict, a senseless attack against a people who are now victims of heavy bombardments.
Stunned and helpless, we are witnessing an absurd war unleashed in a devastating way.  Each day chilling images flow before our eyes, images that powerfully touch us and make us feel the precariousness of our social systems and the vulnerability of peace.
War is always a defeat for humanity and there are never valid reasons to legitimize violence.  It is truly sad to see men, women, children and the elderly devastated by so much suffering caused by carefully calculated choices to destabilize humanity and developed with such coldness and arrogance.
The days are passing since that February 24th … and it seems that there are no paths to stop the use of weapons and begin processes of dialogue and peace.  It is a conflict that persists and seems impossible to stop.
We recognize that the only conflict to be supported and strongly advocated for at this point is the conflict of restless consciences searching for peace.  We must seriously ponder, we must raise awareness, we must not take anything for granted and, before pointing a finger, always ask ourselves if evil exists also because we have made it possible, because we have often turned away in silence or indifference, fueling unjust systems.
Putin’s unacceptable invasion of Ukraine stems from an “armed peace”: from economic, political, etc. conflicts.
This evening, together we will pray for peace … there are so many wars in the world.
Wars endure and always create victims.  There are never winners, we are all losers.  Wars leave the situation for civilians unchanged in time.  Civilians continue to be the true victims of conflicts.
As Adorers of the Blood of Christ we be aware of the urgency to pray for peace, but we must also be committed to daily actions fostering peace.  It is not enough to protest against the Russian act of force and show solidarity for the Ukrainian people unjustly attacked, but we must contribute to creating conditions for an unarmed peace not based on economic interests but on a global ethics of sharing, of co-responsibility and fraternity.
There is no peace without justice.  There is no life without restless consciences longing for peace and in constant and productive conflict with unjust systems that fuel divisions and the power of the strongest.
This evening I would like to recall several passages of the encyclical Pacem in Terris in which St. John XXIII exhorts humanity “especially those invested with public responsibilities, to spare no effort to give things a reasonable and humane course,” so that the dramatic risk of a nuclear war be removed.
Roncalli continues “Let them do everything in their power to save the peace: thus avoiding the horrors of a war, whose frightening consequences no one can foresee.  […]  Let them continue to negotiate, promote, encourage and accept negotiations on every level and in every time.  It is a norm of wisdom and prudence which attracts the blessings of Heaven and earth.”
With St. Maria De Mattias, we too want to collaborate with Christ in the redemption of humanity … giving our lives to reconcile earth with Heaven.
“Peace on earth, the deep longing of human beings of all times, can be established and strengthened only in the full respect of the order established by God.”
Christ shed his blood to re-establish this new order .. a beautiful order that was won at a great price … by shedding all his Blood.
In this River of Mercy we find that peace we must search for and establish within ourselves and around us.
With this prayer for peace we want to become close to the Ukrainian people with the power of intercession and to all the victims of this war … to those who are endeavoring to foster dialogue….
Let us pray and intercede for those who are suffering and are leaving their homes in desperation and in search for refuge.
But we also want to express our closeness to the ASCs in Poland who are involved in welcoming the refugees and who are suffering for their loved ones in Ukraine.  Our thoughts go out to the Sisters in Belarus who find themselves sharing the fate of a people who do not want war but who find themselves involved through political alliances.
Let us powerfully invoke the Precious Blood of Jesus to grant peace, to put an end to wars and to always prefer dialogue to any form of violence, abuse and oppression. 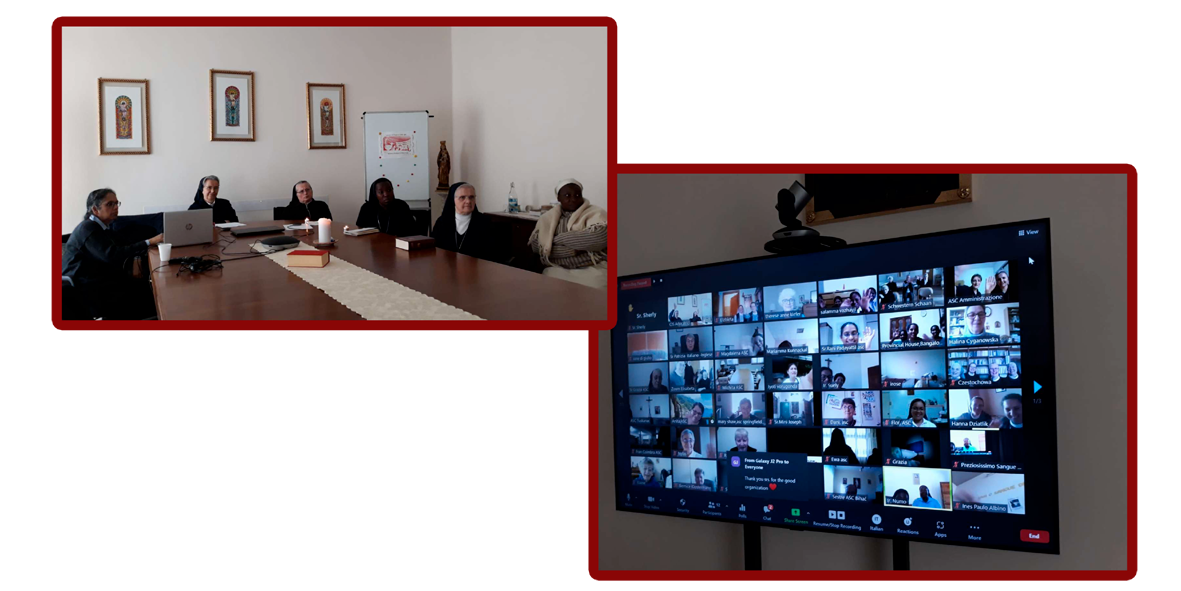 Published in News-UK
More in this category: « February 4, 2022 – Solemnity of St. Maria De Mattias Happy Easter »
back to top